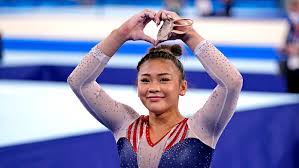 Gold medal draped around her neck, Sunisa Lee rode high atop a fire truck through the streets of St. Paul’s East Side on Sunday as hundreds gathered to celebrate the 18-year-old gymnast’s return home after a stunning Olympic performance in Tokyo.

As Lee waved to the crowd, flanked by her mother, sister and several American flags, 8-year-old Esme Xing flashed a homemade sign up toward her champion.

“I’m a Hmong girl and I can be anything I want,” it read, drawn with red, white and blue markers reminiscent of Lee’s leotard.

“We thought it was very inspiring to her,” said Xiong’s mother, Pang Vang, “not just as a girl — but a Hmong girl.”

“I can do a flip underwater!” Xiong proudly declared of her own gymnastic prowess.

The parade began shortly after 3 p.m., a jubilant homecoming to mark Lee’s profound achievement as the first Asian and Hmong American Olympic gold medal winner in history and a victory that has reverberated around the country. Members of the crowd beamed with pride as Lee passed.

They whistled and waved American flags, clapped and cheered as they held up homemade signs and phones to record a glimpse of Lee.

Official: Sturgis Motorcycle Rally is the busiest in years

Fast cash can be expensive. Here are some alternatives.