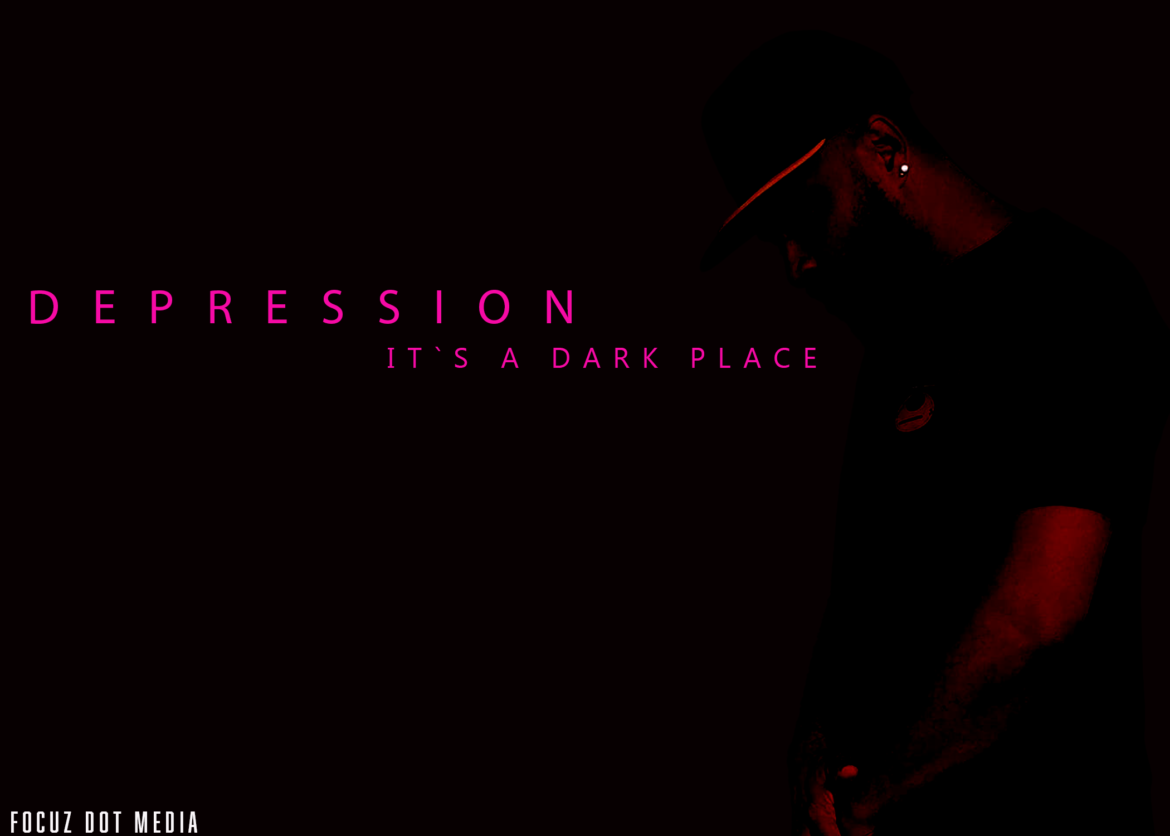 So much pain and no one pays you attention always putting you off, family turns away from you, you have no friends, having the feeling of being all alone, no one to talk to at all, you’re ugly can’t get a date or get into any type relationship, people look right through you as you are a piece of glass as they walk by you, everyone’s enjoying life but you. I know this because this is me…..

Depression (major depressive disorder) is a common and serious medical illness that negatively affects how you feel, the way you think and how you act. Fortunately, it is also treatable. Depression causes feelings of sadness and/or a loss of interest in activities you once enjoyed. It can lead to a variety of emotional and physical problems and can decrease your ability to function at work and at home.

Depression symptoms can vary from mild to severe and can include:

Symptoms must last at least two weeks and must represent a change in your previous level of functioning for a diagnosis of depression.

Also, medical conditions (e.g., thyroid problems, a brain tumor or vitamin deficiency) can mimic symptoms of depression so it is important to rule out general medical causes.

Depression affects an estimated one in 15 adults (6.7%) in any given year. And one in six people (16.6%) will experience depression at some time in their life. Depression can occur at any time, but on average, first appears during the late teens to mid-20s. Women are more likely than men to experience depression. Some studies show that one-third of women will experience a major depressive episode in their lifetime. There is a high degree of heritability (approximately 40%) when first-degree relatives (parents/children/siblings) have depression.

Depression Is Different From Sadness or Grief/Bereavement

The death of a loved one, loss of a job or the ending of a relationship are difficult experiences for a person to endure. It is normal for feelings of sadness or grief to develop in response to such situations. Those experiencing loss often might describe themselves as being “depressed.”

But being sad is not the same as having depression. The grieving process is natural and unique to each individual and shares some of the same features of depression. Both grief and depression may involve intense sadness and withdrawal from usual activities. They are also different in important ways:

Distinguishing between grief and depression is important and can assist people in getting the help, support or treatment they need.

Depression can affect anyone—even a person who appears to live in relatively ideal circumstances.

Several factors can play a role in depression:

How Is Depression Treated?

Depression is among the most treatable of mental disorders. Between 80% and 90% percent of people with depression eventually respond well to treatment. Almost all patients gain some relief from their symptoms.

Before a diagnosis or treatment, a health professional should conduct a thorough diagnostic evaluation, including an interview and a physical examination. In some cases, a blood test might be done to make sure the depression is not due to a medical condition like a thyroid problem or a vitamin deficiency (reversing the medical cause would alleviate the depression-like symptoms). The evaluation will identify specific symptoms and explore medical and family histories as well as cultural and environmental factors with the goal of arriving at a diagnosis and planning a course of action.

Medication: Brain chemistry may contribute to an individual’s depression and may factor into their treatment. For this reason, antidepressants might be prescribed to help modify one’s brain chemistry. These medications are not sedatives, “uppers” or tranquilizers. They are not habit-forming. Generally antidepressant medications have no stimulating effect on people not experiencing depression.

Antidepressants may produce some improvement within the first week or two of use yet full benefits may not be seen for two to three months. If a patient feels little or no improvement after several weeks, his or her psychiatrist can alter the dose of the medication or add or substitute another antidepressant. In some situations other psychotropic medications may be helpful. It is important to let your doctor know if a medication does not work or if you experience side effects.

Depression (major depressive disorder or clinical depression) is a common but serious mood disorder. It causes severe symptoms that affect how you feel, think, and handle daily activities, such as sleeping, eating, or working. To be diagnosed with depression, the symptoms must be present for at least two weeks.

Some forms of depression are slightly different, or they may develop under unique circumstances, such as:

Major depression is a medical condition that is best treated by a health professional. Getting physical exercise, reducing alcohol intake, avoiding substance abuse, and engaging with friends and family may also help.

Seeking medical care Seek emergency help if you Have suicidal thoughts Might harm yourself or others Make an appointment to see a doctor if you Feel depressed.

A type of bipolar disorder characterized by depressive and hypomanic episodes.It involves at least one depressive episode lasting at least two weeks and at least one hypomanic episode lasting at least four days.Depressive symptoms include sadness or hopelessness. Hypomanic symptoms include a persistently elevated or irritable mood.Treatment includes counseling and medications, such as mood stabilizers.

Had a heart attack, stent or bypass procedure? You may still be at risk.

Very common More than 3 million US cases per year Treatable by a medical professiona lMedium-term: resolves within months Usually self-diagnosable Lab tests or imaging not required For informational purposes only. Consult your local medical authority for advice.

Climate depression is real. And it is spreading fast among our youth

1 in 3 College Freshmen Has Depression, Anxiety

Starting college can be a time of fun, new experiences and growth. Yet it can also be a rough transition for many students who struggle with mental health issues.

A new study from researchers in the United Kingdom and Canada found about one-third of first-year students have or develop moderate to severe anxiety or depression.

When these young adults had increasing use of illicit drugs, they had greater odds of developing high levels of anxiety or depression. Yet if they were more socially active, their mental health tended to be better.

While the research involved college freshmen in Canada, experts say the findings also apply to college students in the United States.

“We’ve been seeing that the mental health of college students has been deteriorating,” said Dr. Rachel Conrad, director of young adult mental health at Brigham and Women’s Hospital in Boston. She was not involved in the study.

Teens are experiencing an increasing number of suicides, as well as a rise in anxiety, specifically social anxiety, Conrad said.

The study was led by Kiera Louise Adams, a doctoral student at the University of Oxford in England. She and her colleagues analyzed nearly 1,700 responses from a survey of first-year undergraduates at a public Canadian university taken in September 2018 and in March 2019.

Participants answered questions about parental education, early life adversity and lifetime occurrence of mood and anxiety disorders. The researchers assessed the amount and frequency of alcohol use, sleeping pills and stimulants that had not been prescribed, cannabis, painkillers, opiates, psychedelics and other recreational drugs the students were using. These measures were rated on a scale.

Students who had a history of internalizing disorders, such as anxiety and depression, when they began were almost four times as likely not to recover from significant levels of anxiety/depressive symptoms as those without that history, according to the research. Conversely, students who felt connected to university life and their peers had greater odds of recovering.

Loneliness is a significant risk factor, both for physical and mental health, and some studies show that loneliness is actually more dangerous to a person’s physical well-being than obesity, Conrad said.

Beware of an Unexpected Calmness in our Patients and Others

“Tragedies should not be deemed senseless.” Now I have another word—really, words—that can not only be very misleading, but dangerous to misinterpret.

As written about recently in the Washington Post in the article “Michigan Schools order investigation after staff raised alarms about suspect hours before fatal shooting,”2 the superintendent was quoted as saying that the school counselors did not take action against the perpetrator in large part because he “appeared calm” after a discussion about his graphic drawing of blood and gunshot wounds.

Unfortunately, appearing calm for no clear and meaningful reason is generally not a good sign in the midst of psychological turmoil. Too often, it is a reflection of someone in distress who has decided to commit homicide or suicide, with an ensuing sense of relief in the decision. In this case, it was homicide.

In another case back in the news, it was a case of suicide. Again in the Washington Post, there was a long article titled “Jamie Raskin’s year of grief and purpose.”3 At the end of December, 2020, Representative Rep. Raskin recalled that his son, who had long been suffering from clinical depression, did not seem depressed and upset. Rather, “it was a sign of serene calm.” Now, almost a year after the suicide, Raskin wrenchingly recognizes that it was a sign of something going awry—that his son had indeed decided to commit suicide and did not want to be talked out of it. Interestingly enough, the article conveys that his son saw his long-term psychiatrist the day before he died, but the psychiatrist did not have any increased concern and was astonished like everyone else.