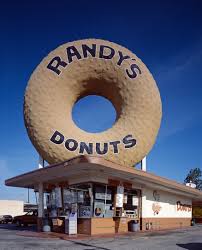 The iconic Los Angeles brand Randy’s Donuts is coming to Las Vegas — with not one but seven stores. The company has purchased a vacant drive-thru restaurant at 2170 S. Rainbow Blvd., between Oakey Boulevard and Sahara Avenue, and vacant land at Blue Diamond Road and Cameron Street. The Rainbow location is expected to open in late summer and Blue Diamond in fall or winter. The other five valley Randy’s will be a mix of casino and stand-alone locations. Owner Mark Kelegian said he’s already working with one of the larger casino companies. Randy’s is known to many people for the giant doughnut on the roof of the original Inglewood location, which is near Los Angeles International Airport.

Kelegian said Las Vegas was a logical choice because of the number of visitors it attracts and its 24-hour nature. People think we do most of our sales in the morning,” he said in a telephone interview Thursday. “We do about 50 percent of our sales from 5 a.m. to noon, and we’re still selling all day long and into the night. It’s a brand that really goes all day long, and so does Las Vegas. He said UFC president Dana White has been a fan since filming a spot in Los Angeles and encouraged the expansion to Las Vegas. He came and we let him make his raspberry jelly doughnuts and we just had a great time,” Kelegian said. Kelegian and his family bought the company, which dates to 1962, from the family of the original owner in 2015. They have since opened four more locations in Greater Los Angeles, and there are three in South Korea, with more on the way, in Southern and Central California as well as Las Vegas. We’re franchising around the world, and we’re going to be in seven to eight countries by the end of the year,” he said.