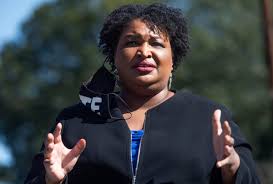 A federal judge sided with the state of Georgia in a lawsuit filed by a group associated with Democrat Stacey Abrams challenging the constitutionality of its election practices.

“Although Georgia’s election system is not perfect, the challenged practices violate neither the constitution nor the VRA,” U.S. District Judge Steve Jones, an Obama appointee, wrote, referring to the Voting Rights Act of 1965. He detailed his reasoning in a 288-page order siding against Abrams’ Fair Fight Georgia group in a lawsuit filed four years ago alleging voter suppression and racial discrimination after she narrowly lost to the state’s current Republican Gov. Brian Kemp.

Kemp, who was Georgia Secretary of State when the lawsuit was filed, applauded the ruling as a victory against an attempt by Abrams to weaponize the legal system for political gain.

“Judge Jones’ ruling exposes this legal effort for what it really is: a tool wielded by a politician hoping to wrongfully weaponize the legal system to further her own political goals,” Kemp said in a statement.

“While the Court’s actions are not the preferred outcome, the conduct of this trial and preceding cases and legislative actions represent a hard-won victory for voters who endured long lines, burdensome date of birth requirements and exact match laws that disproportionately impact Black and Brown voters,” Abrams said in a statement.

Abrams’ Fair Fight Action organization filed the lawsuit along with Care in Action, a nonprofit that advocates for domestic workers. Several churches later joined as plaintiffs. It was originally extremely broad and called for a significant overhaul of Georgia’s election system. By the time it got to trial, the scope had narrowed significantly after some allegations were resolved by changes in state law and others were dismissed by the court.

Where the candidates for Georgia governor stand on the issues