What are Spike Proteins? 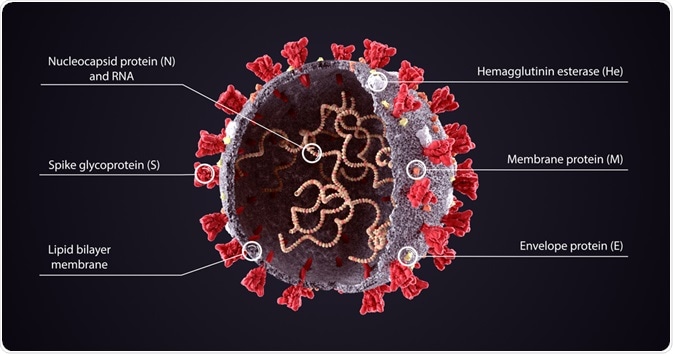 In virology, a spike protein or peplomer protein is a protein that forms a large structure known as a spike or peplomer projecting from the surface of an enveloped virus. The proteins are usually glycoproteins that form dimers or trimers.

Severe acute respiratory syndrome coronavirus 2 (SARS-CoV-2) is the virus behind the worldwide outbreak of COVID-19 disease. One of the key biological characteristics of SARS-CoV-2, as well as several other viruses, is the presence of spike proteins that allow these viruses to penetrate host cells and cause infection.

An overview of the coronavirus structure

Coronaviruses (CoVs) like the Middle East respiratory syndrome (MERS)-CoV, which had infected almost 2,500 individuals by the end of 2019, as well as the novel severe acute respiratory syndrome (SARS)-CoV-2, are enveloped and spherical viruses that typically measure between 80 and 120 nanometers (nm) in size.

The RNA genome of coronaviruses, which, at a median length of 29 kb is the longest among all RNA viruses, is comprised of six to ten open reading frames (ORFs) that are responsible for encoding both the replicase and structural proteins for the virus.

Each of the components of the viral genome is packaged into a helical nucleocapsid that is surrounded by a lipid bilayer.

The viral envelope of coronaviruses is typically made up of three proteins that include the membrane protein (M), the envelope protein (E), and the spike protein (S).

All the myths and facts about COVID-19 vaccines

On December 11, 2020, the U.S. Food and Drug Administration issued the first emergency use authorization (EUA) for a vaccine for the prevention of coronavirus disease 2019 (COVID-19) caused by severe acute respiratory syndrome coronavirus 2 (SARS-CoV-2) in individuals 16 years of age and older. On May 10, 2021, the FDA expanded the emergency use authorization for the Pfizer-BioNTech COVID-19 Vaccine to include adolescents 12 through 15 years of age. On June 25, 2021, the FDA revised the patient and provider fact sheets regarding the suggested increased risks of myocarditis (inflammation of the heart muscle) and pericarditis (inflammation of the tissue surrounding the heart) following vaccination. On August 12, 2021, the FDA amended the Pfizer-BioNTech COVID-19 Vaccine EUA to allow for an additional dose to be given to certain immunocompromised individuals. The emergency use authorization allows the Pfizer-BioNTech COVID-19 Vaccine to be distributed in the U.S.

DON`T GIVE UP ON LIFE

Understanding Omicron: Changes In The Spike Protein And Beyond And What They Portend Part 2

This is the second of a two-part series. In part one, we described the mutations in the Omicron Spike protein. In part two, we will describe mutations in other parts of the genome.

The Omicron variant has the potential to drive the next major wave of the pandemic. The figure below illustrates the rapid rise of Omicron in South Africa. Omicron contains at least 50 amino acid mutations and roughly ten non-amino acid-altering mutations, some of which may be in regulatory sequences.

Depending on how they are counted, there are at least 36 amino acid changes in the Spike (S) protein alone. These changes likely account for the decreased sensitivity of Omicron to existing protective antibodies, either via previous infection or vaccine. These changes also account for increased infectivity by increasing the affinity of the S protein to the ACE2 receptor, as well as increasing the efficiency of viral entry in the form of membrane fusion.

Here we discuss the potential implications of the mutations that occur outside of the S protein, which also have the potential to increase the transmissibility, immune evasion, and virulence of Omicron.

There is increasing evidence that mutations outside of the S protein determine the biological properties of the virus. A recent paper by Syed et al. describes a set of mutations in the Nucleocapsid protein within the Delta variant, as well as many other variants of concern, which increases the ability of the virus to replicate, at least in cell culture.

A more recent paper analyzed the entire viral genome in terms of potential contributions to transmission characteristics in variants of interesting concern. Garvin et al. pioneered methods to understand interactions of multiple genes and how they can contribute to an inherited viral trait in many species. An observed trait may be the result of the interaction of changes in two or more genes simultaneously—a phenomenon called epistasis.

This process has previously been evoked to understand the properties of the SARS-CoV-2 S protein. For example, one mutation in the S protein may contribute to immune evasion, but decrease affinity. A second mutation is the same gene that can make up for that deficit by increasing affinity. The net effect of these two changes would be to create an S protein with both increased immune evasion and increased transmission. Such theoretical analysis of variants of concern prior to the discovery of Omicron highlighted epistatic changes common to major variants. The genes that have been implicated in improving the transmissibility of various concern in Garvin et al.’s analysis include the S protein, NSP6, and NSP13. There are likely other genes involved as well.

Additionally, Kroger and colleagues found that Delta variant mutations in Orf6, Orf9b, and N result in overexpression of those genes. They show that this overexpression, along with S protein mutations, contributes to the ongoing success of the Delta variant by improving the virus’s suppression of the innate immune system. It is with that background that here we examine the full range of changes outside of the S protein.

Omicron, like almost all other variants with the exception of some East African strains (A.30 and A.23.1), stems from the first major variant of SARS-CoV-2, which we call The Triad and others call D614G. This variant includes the well-known D614G mutation in the S protein, the P323L mutation in the NSP12 polymerase, and the C241U nucleotide mutation in the 5’ untranslated region.

The D614G mutation increases the infectivity of the virus by increasing the affinity between the S1 and S2 subunits post-cleavage and increasing “up” formation efficiency of the receptor-binding domain. The C241U mutation in the 5’ UTR does not affect protein sequences, however, it creates a cellular RNA binding site for a cellular TAR binding protein known to affect RNA metabolism, including transcription and translation efficiency.

The role of the P323L mutation is currently unknown, but its conservation suggests some impact on virus replication.  In Omicron, there are ten synonymous mutations not resulting in an amino acid change. In SARS-CoV-2 analysis, there has been a tendency to ignore the potential of mutations in non-protein-coding regions, including the C241U mutation present in the Triad. Of the ten synonymous changes in Omicron, all but C241U are unique. However, such changes may affect what are called cis-acting regulatory sequences by altering structures and key recognition sequences in viral RNA required for replication, transcription, and translation.

When fossils come to life: SARS-CoV-2 spike, syncytin-1, and other curious fusion proteins

The homotrimeric spike glycoprotein (S) from SARS-CoV-2, particularly its S2 subunit, is a fusion protein extraordinaire. It can fuse viral particles to cells and also fuse cells to cells to create multifarious syncytia among different cell phenotypes. Depending on which exact versions are under consideration, the spike can perform these feats via multiple mechanisms acting at both the intracellular and extracellular sides of cell membranes.

These fusion functions are somewhat analogous to typical homotrimeric ENV (envelope) proteins like our syncytin-1 endogenous retroviral ENV protein, and the GP160 ENV glycoprotein from the HIV virus. GP160, the HIV ‘spike’ protein, is ultimately processed at its own furin cleavage site (also found in syncytin-1) into a GP120 and a GP41 protein, both of which can adopt distinct pre- and post-fusion configurations. The SARS-CoV-2 genome, however, already specifies a separate small ENV protein (conveniently designated as E), which assembles into a presumptive cation channel with a central fusion pore.

There are no env, pol, gag, or pro genes defined as such for the SARS-CoV-2 genome, as is the case for the retroviruses, which must integrate into our DNA as part of their lifecycle. Curiously, researchers have found that the SARS-CoV-2 spike protein, behaving of its own accord, directly participates in the activation of endogenous retroviruses in our cells which contributes to observed pathology. What exactly is going on here?

How long do mRNA and spike proteins last in the body?

Vaccines generally work by introducing a piece of a virus or bacteria into your body so you can develop long-lasting immunity to the pathogen. While the piece introduced by the vaccine rapidly fades away, your body’s immune system remembers what it saw. When it encounters the virus or bacteria in the real world it mounts a strong immune response preventing or decreasing the severity of infection.

Some have expressed concern that the spike protein or other parts of the mRNA vaccines build up in the body, particularly in the ovaries or the brain. Here we break down the data to show where mRNA vaccines (and spike proteins) travel in the body. There is no evidence that any mRNA or protein accumulates in any organ.

Why do they use spike proteins?

The spike protein is unique to SARS-CoV-2 – it doesn’t look like other proteins your body makes. So antibodies created against the spike protein won’t harm your body, they will only target coronavirus.

How long mRNA lasts in the body

The Pfizer and Moderna vaccines work by introducing mRNA (messenger RNA) into your muscle cells. The cells make copies of the spike protein and the mRNA is quickly degraded (within a few days). The cell breaks the mRNA up into small harmless pieces. mRNA is very fragile; that’s one reason why mRNA vaccines must be so carefully preserved at very low temperatures.

Experts already have a prediction about the next COVID-19 variant

The next coronavirus variant could be more contagious than the omicron variant, experts said Tuesday. The main question, though, is whether or not it will be more deadly.

The news: World Health Organization officials said Tuesday that the new major COVID-19 variant will have the ability to spread quickly because it will work to overtake omicron, according to CNBC.

Does omicron mean a new phase is coming for the COVID-19 pandemic?

Why the COVID-19 pandemic hasn’t hit endgame yet

Why it matters: With omicron cases on the downturn, there’s been an ongoing theory that the pandemic might have reached its endgame. But this isn’t the case, according to experts.

Warnings: Kerkhove warned against the ongoing theory that the coronavirus will morph into more mild variants.

53 thoughts on “What are Spike Proteins?”