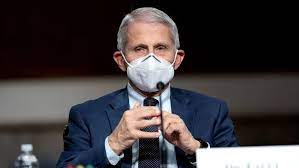 Dr. Anthony Fauci, director of the National Institute of Allergy and Infectious Diseases and President Biden’s chief medical adviser, has tested positive for Covid-19, the institute said Wednesday. Fauci, 81, has mild symptoms and has been boosted twice, the institute said in a statement.

NIAID said Fauci found out that he was positive on a rapid antigen test. The director will work from home and follow agency protocol, returning to the National Institutes of Health campus only after he tests negative.

Covid infections are surging in the U.S. again, driven by the highly contagious omicron variant, after dipping below 30,000 a day in March and April, according to a CNBC analysis of data compiled by Johns Hopkins University. The average number of new infections a day has held steady over 100,000 since the end of May, according to the data.

NIAID said in its statement that Fauci will follow Covid-19 guidelines issued by the federal Centers for Disease Control and Prevention and “medical advice from his physician and return to NIH when he tests negative.”

The infectious disease expert has been the public face of the response to Covid since the pandemic began in earnest in the United States in March 2020.

Fauci’s promotion of coronavirus mitigation efforts, including social distancing, mask wearing and, when they became available, vaccinations, made him a hero to many. But he also drew criticism from others who believed official responses to Covid were too heavy-handed.

Dr. Anthony Fauci, the leader of the U.S. government’s Covid pandemic response effort, has tested positive for the coronavirus.

Evacuation orders have lifted for the rest of the Timberline neighborhood, including those previously listed at GO status.

Resident re-entry will begin at 4 p.m. Wednesday, according to a CCSO release. Residents of the neighborhood should report to the intersection of Campbell Road and Lupine Lane, to be checked in by deputies. Identification or proof of residence in the area will be required for entry.

The area will be closed to non-residents until 6 p.m. Wednesday.

Those in SET status should still be ready to evacuate at a moment’s notice.

Areas still in GO status for evacuations at this time include U.S. 89 north of Wupatki Trails to Sacred Mountain Trading Post, Moon Crater and Alpine Ranchos.