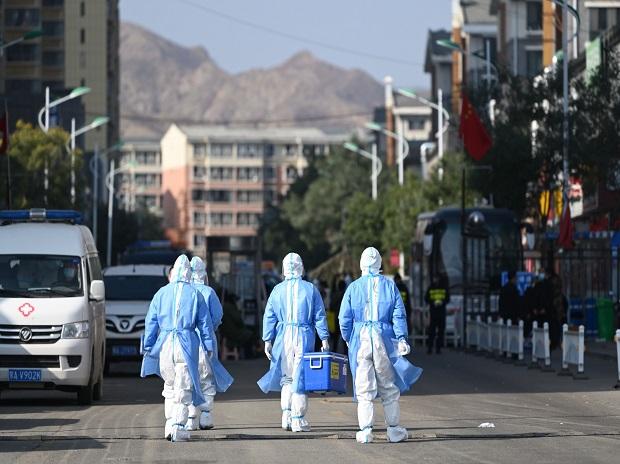 Hong Kong (CNN)Health workers in hazmat suits are not typically among the cast of characters featured at Shanghai Disneyland’s Halloween party. That was until this year, when a single confirmed case sent the park, and its adjacent shopping district, Disney town, into a snap lockdown Sunday evening.

The extreme measure saw tens of thousands of visitors and staff forced to undergo coronavirus testing before they were allowed to leave the park, as police blocked the exits and secured the grounds.

In a video that’s since gone viral on Chinese social media, crowds are shown lining up in front of makeshift testing sites, as health workers in full personal protective equipment (PPE) watch on. In the background colorful fireworks light up the night sky above a storybook castle.

The surreal juxtaposition of an impromptu mass testing drive and a Disney fireworks show is the latest example of how China’s stringent zero-Covid policy has permeated every corner of Chinese citizens’ lives.

As countries around the world gradually open up and learn to live with the coronavirus, China remains bent on completely eradicating Covid-19 from inside its borders, deploying massive efforts and resources to stamp out even a single case. In its public statement, Shanghai Disney did not offer detailed reasons for the shutdown, only saying it was to “cooperate with the pandemic investigation in other provinces and cities.” But a local health commission in the neighboring province of Jiangsu said a woman who visited Shanghai Disney on Saturday tested positive for Covid-19.The woman had taken a train to Shanghai from Jiangxi province on Friday.

During her return trip the next day, she was found to be a close contact of a confirmed case in Jiangxi and taken off the train for quarantine. She tested positive on Sunday and had a fever, and was diagnosed as a confirmed case, according to the municipal government of Hangzhou, where the woman alighted. As of Monday morning, 33,863 people who were at Shanghai Disneyland and Disney town over the weekend had been tested, and all results came back negative, according to the Shanghai government.

Viruses similar to coronavirus don’t survive well on porous surfaces Despite the little information we have about the survivability of coronavirus on your clothes, we do know a few other helpful things.

How long can COVID-19 linger in the air?

The smallest very fine droplets, and aerosol particles formed when these fine droplets rapidly dry, are small enough that they can remain suspended in the air for minutes to hours

But state media said about 100,000 people had visited the park at the weekend, citing sources. Both Disneyland and Disney town will remain closed on Monday and Tuesday “in order to follow the requirement of Covid-19 prevention and control,” the resort said in the statement. The subway station connected to Disney has also been closed until further notice. While the park’s shutdown over a single case would likely be considered extreme by most people outside of China, many Chinese internet users have praised the Shanghai government and Disney for what they see as a lenient, targeted and effective response.

China locks down a northwestern city to subdue a small outbreak.

The Chinese government ordered the northwestern city of Lanzhou locked down on Tuesday as officials carried out widespread testing to quash a small Covid-19 outbreak.

Lanzhou, a city of about four million people, reported six new coronavirus cases on Tuesday, and a total of 39 over the past week. China, where the coronavirus first emerged in late 2019, has been battling a recent flare-up of new cases largely in the northwest of the country that were spread by domestic travel.

The country enforces a strict “zero Covid” policy, carrying out widespread lockdowns and testing to eliminate even small-scale outbreaks.

By Monday evening, medical workers had tested nearly 12 million people in Gansu Province, including more than 2.8 million in Lanzhou, its capital. The testing in Lanzhou continued on Tuesday.

What are the stages of myocarditis?

At the cellular and tissue levels, the pathological progression of viral myocarditis consists of 3 stages: the acute stage triggered by viral entry and replication, the subacute stage characterized by inflammatory cell infiltration, and the chronic stage featuring cardiac remodeling

What happens if you exercise with myocarditis? Good heart health is often related to exercise, keeping blood pressure low and strengthening the heart muscle. However, exercise can actually harm a heart affected by myocarditis. This puts athletes and young people at very high risk, making myocarditis the 3rd leading cause of sudden cardiac death in young adults