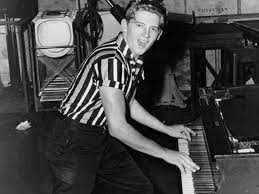 Jerry Lee Lewis has died, The Associated Press reports. A cause of death has not been revealed, but, in recent years, Lewis dealt with various illnesses, such as acute bronchitis, which forced him to miss a birthday celebration in 2016. The controversial rock’n’roll pioneer, often referred to by his nickname “The Killer,” was 87 years old. Lewis’ death was erroneously reported by TMZ earlier this week.

Jerry Lee Lewis was an American pianist, singer and songwriter. Nicknamed “the Killer”, he was described as “Rock and roll’s first great wild man and one of the most influential pianists of the 20th century.”

Lewis was born in Ferriday, Louisiana. From an early age, he played music with his cousins. He studied blues musicians at the local honky-tonk. He enrolled briefly at the Southwestern Bible Institute in Waxahachie, Texas, but was kicked out for playing wild piano renditions of hymns. He eventually got a job in 1956 as a session musician at Sun Records in Memphis. One day, Lewis found himself in a session with Elvis Presley, Johnny Cash, and Carl Perkins—they were famously dubbed the “Million Dollar Quartet.”

Sam Phillips let Lewis record in his spare time, and, while he didn’t find success with some of his first records, he found hits with “Whole Lotta Shakin’ Goin’ On” and “Great Balls of Fire.” His star turn came in 1957 on The Steve Allen Show, where his reputation as a piano-attacking rockabilly wild man was on full display. In 1958, he famously set a piano on fire when he was told that he would open for Chuck Berry (and not the other way around).

He became an international star, and when he arrived in London for a 1958 tour, he stepped off the plane accompanied by his new wife, Myra Gale Brown, who was 13 years old and Lewis’ third cousin. Lewis, who was 22 years old, told the press that Brown was 15, but reporters discovered her real age, and the news of Lewis’ underage wife hit newspapers all over the world. The media, audiences, and industry rapidly turned on the rock star over the incident. Concerts were canceled and his songs appeared on the radio far less often. This period of his life was chronicled in the 1989 biopic Great Balls of Fire! starring Dennis Quaid and Winona Ryder.

Niall Horan is dropping new music and heading out on tour