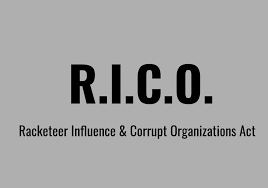 The Racketeer Influenced and Corrupt Organizations Act (RICO) of 1970 seeks to strengthen the legal tools in evidence gathering by establishing new penal prohibitions and providing enhanced sanctions and new remedies for dealing with the unlawful activities of those engaged in organized crime.

There are 35 specific crimes included in the RICO Act.

Passed in 1970, the Racketeer Influenced and Corrupt Organizations Act (RICO) is a federal law designed to combat organized crime in the United States. It allows prosecution and civil penalties for racketeering activity performed as part of an ongoing criminal enterprise. Such activity may include illegal gambling, bribery, kidnapping, murder, money laundering, counterfeiting, embezzlement, drug trafficking, slavery, and a host of other unsavory business practices.

To convict a defendant under RICO, the government must prove that the defendant engaged in two or more instances of racketeering activity and that the defendant directly invested in, maintained an interest in, or participated in a criminal enterprise affecting interstate or foreign commerce. The law has been used to prosecute members of the mafia, the Hells Angels motorcycle gang, and Operation Rescue, an anti-abortion group, among many others.

(1) racketeering activity means (A) any act or threat involving murder, kidnapping, gambling, arson, robbery, bribery, extortion, dealing in obscene matter, or dealing in a controlled substance or listed chemical (as defined in section 102 of the Controlled Substances Act), which is chargeable under State law and punishable by imprisonment for more than one year; (B) any act which is indictable under any of the following provisions of title 18, United States Code: Section 201 (relating to bribery), section 224 (relating to sports bribery), sections 471, 472, and 473 (relating to counterfeiting), section 659 (relating to theft from interstate shipment) if the act indictable under section 659 is felonious, section 664 (relating to embezzlement from pension and welfare funds.

Terrance Williams has claimed to put up “around $100,000″ to start the Cash Money record label — was delivered a life-sentence “plus 240 years for ‘continued criminal enterprise’ and ‘conspiracy to commit murder on June 24, 1999.

Boosie I understand you hurt

“Hot Boys” is a name that I gave my brother to name the group… The Hot Boys name came from some real street Gangster’s Dooney, Sterling, Mosquito, and me. All three are dead now. “No we didn’t bust raps, we bust caps!!!

I remember when Cash Money used to rent one raggedy bus to ride out of town to do concerts. I would be right there some of the times. Two guns and my bulletproof vest. While the C.M.R. Crew were entertaining people, I was hooking up heroin deals”

Who benefits from the First Step Act?

The First Step Act of 2018 provides eligible inmates the opportunity to earn 10 to 15 days of time credits for every 30 days of successful participation in Evidence Based Recidivism Reduction Programs and Productive Activities.