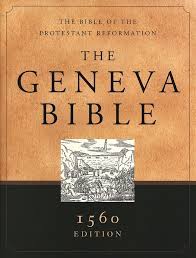 Geneva Bible, also called Breeches Bible, English translation of the Bible published in Geneva (New Testament, 1557; Old Testament, 1560) by a colony of Protestant scholars in exile from England who worked under the general direction of Miles Coverdale and John Knox and under the influence of John Calvin.

Geneva Bible, also called Breeches Bible, English translation of the Bible published in Geneva (New Testament, 1557; Old Testament, 1560) by a colony of Protestant scholars in exile from England who worked under the general direction of Miles Coverdale and John Knox and under the influence of John Calvin. 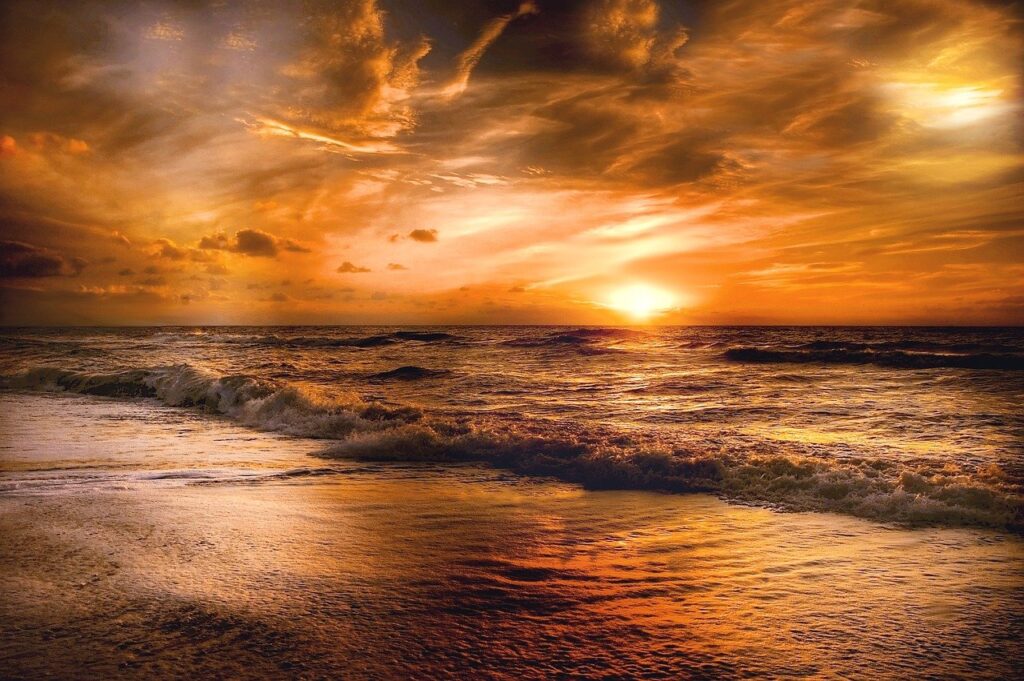 The Geneva Bible is one of the most historically significant translations of the Bible into English, preceding the King James Version by 51 years.

The English churchmen had fled London during the repressive reign of the Roman Catholic Mary I, which had halted the publication of Bibles there.

The work acquired the sobriquet “Breeches Bible” because it described Adam and Eve as having made “breeches” to cover their nakedness (Genesis 3:7), instead of “aprons” or “loincloths.”

The Book of Revelation – also called the Apocalypse of John, Revelation to John or Revelation from Jesus Christ – is the final book of the New Testament, and consequently is also the final book of the Christian Bible. Its title is derived from the first word of the Koine Greek text: apocalypses, meaning “unveiling” or “revelation”. The Book of Revelation is the only apocalyptic book in the New Testament canon. Thus, it occupies a central place in Christian eschatology.

The author names himself as “John” in the text, but his precise identity remains a point of academic debate. Second-century Christian writers such as Papias, Justin Martyr, Irenaeus, Melito (the bishop of Sardis), Clement of Alexandria, and the author of the Muratorian fragment identify John the Apostle as the “John” of Revelation. Modern scholarship generally takes a different view,  with many considering that nothing can be known about the author except that he was a Christian prophet.

Modern theological scholars characterize The Book of Revelation’s author as “John of Patmos“. The bulk of traditional sources date the book to the reign of the Roman emperor Domitian (AD 81–96), which evidence tends to confirm. The book spans three literary genres: the epistolary, the apocalyptic, and the prophetic. It begins with John, on the island of Patmos in the Aegean Sea, addressing a letter to the “Seven Churches of Asia“. He then describes a series of prophetic visions, including figures such as the Seven-Headed Dragon, the Serpent, and the Beast, which culminate in the Second Coming of Jesus.

The obscure and extravagant imagery has led to a wide variety of Christian interpretations. Historicist interpretations see Revelation as containing a broad view of history, whilst preterist interpretations treat Revelation as mostly referring to the events of the Apostolic Age (1st century), or, at the latest, the fall of the Roman Empire. Futurists, meanwhile, believe that Revelation describes future events, with the seven churches growing into the body/believers throughout the age, and a reemergence or continuous rule of a Roman/Graco system with modern capabilities described by John in ways familiar to him, and idealist or symbolic interpretations consider that Revelation does not refer to actual people or events, but is an allegory of the spiritual path and the ongoing struggle between good and evil.

The Great Bible (named for its large page size and first ordered by Henry VIII in 1538) was restored to the churches after Elizabeth I’s succession halted persecution of Anglicans and Protestants, but the Geneva Bible, imported from Europe and not printed in England until 1576, quickly surpassed the Great Bible in public favour.

The Geneva Bible was the first Bible in English to add numbered verses. It was also one of the first to include extensive commentary notes, which were later deemed “seditious” by King James when he banned the Geneva Bible in 1611. Despite the king’s contempt, the work’s enduring popularity made the Geneva Bible an important influence on the translators of the King James Version.

The King James Version, also known as the King James Bible, is an English translation of the Christian Bible for the Church of England, commissioned in 1604 and completed as well as published seven years later in 1611 under the sponsorship of James VI

There are many people who love the rich language that you find in the King James version of the Bible. In fact, there are some who believe that the King James version is the most authentic and accurate version or translation of Scripture.https://a4bbe1db11b7da60990a62c37a52efda.safeframe.googlesyndication.com/safeframe/1-0-38/html/container.html

While there may be room for debate on that issue that is not the focus of this article. I simply want to focus on who wrote the King James Bible and why?

If you look at the title you might think well King James wrote it – after all it is his version. Well that is not totally accurate. But what is accurate is that the translation of this Bible happened on his watch and under his commission. Let’s dig in to find out more about this King James Version.

Who Was King James?

It would probably make sense to know who this King James fellow is anyway. For the younger sports fans out there King James is not Lebron James. He did not write this Bible.

To help you understand who this person was here is a little historical perspective. King James had a very interesting beginning to his reign as King. He was crowned King of Scotland at the grand old age of 1. He was born on June 19,1566 to Mary Queen of Scots and her second husband Lord Darnley. Lord Darnley was murdered when James was eight months old and his mother was forced to abdicate the throne on June 24, 1567. After this abdication, her son was made king. Eventually in 1603 he would be crowned King of England after the death of Queen Elizabeth. Just for clarity sake, you may see him referred to as James IV of Scotland and James I of England. These are referring to the same person.https://a4bbe1db11b7da60990a62c37a52efda.safeframe.googlesyndication.com/safeframe/1-0-38/html/container.html#xpc=sf-gdn-exp-7&p=https%3A//www.biblestudytools.com

The issue of James’ religious background is not so simple. When he was born, his parents were Catholic so he was baptized as an infant as a Roman Catholic. During his time there was not total religious unity or tolerance. As he got older it appears that he became a Protestant, however he still had to deal with the various religious factions of his day. Mainly Presbyterians, Anglicans, and the influence of the Roman Catholic Church.

Now let’s get to the story of who wrote the King James Bible and why. With the invention of the printing press by Johannes Gutenberg in the 15th century, people’s appetite for translation of ancient texts grew. This included ancient classical pieces as well as the Biblical texts which were written in Classical Greek and Hebrew. This desire led to the creation of the Tyndale Bible – translated in 1526 – and is credited as being the first English Bible translated from the original Greek and Hebrew texts.

In 1604 King James sought to address many of the religious differences by creating one universally accepted translation of the scriptures. This undertaking was begun by a committee of scholars led by John Rainolds. This was no small undertaking as the process literally took seven years; it was a very meticulous undertaking. Rainolds never saw his work completed because he died four years before the King James Version of the Bible was published, which happened in 1611.

When you think about who wrote the King James Bible you cannot credit one person with doing that. It was a team of scholars doing the hard and tedious work of translating texts into English. By the way, this process is true when it comes to most Bible translations – one person is never completely responsible for total translation. It is usually a team. Even though the King James Bible bears his name, it is more a result of this Bible translation being commissioned under his watch, not because he wrote it or translated it himself.

One thought on “Geneva Bible”